Preliminary sales for 2015 are 820,000 million pesos. For this year, the growth forecast is 20% and estimated to continue increasing its value with its foray into the local stock market. 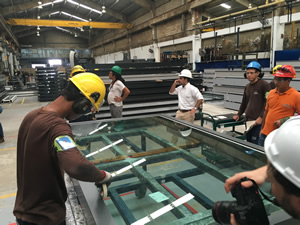 Preliminary sales for 2015 are 820,000 million pesos. For this year, the growth forecast is 20% and estimated to continue increasing its value with its foray into the local stock market.

The parent company Tecnoglass Inc., specialized in manufacturing of high quality window frames for the residential and commercial construction industry, expects to maintain a growth rate in sales close to 40% in 2016.

The solid financial figures last year and its debut in the Colombian Stock Exchange (BVC) in early January are important achievements for the company that will be available to all Colombians who wish to invest in it.

This business group, consisting of several subsidiaries like Tecnoglass SA, focused on the transformation of glass and aluminum, and Energía Solar, focused on the assembly of architectural systems, will continue to pursue the glass and window frames market to convert Barranquilla into a world-class axis of industrial development. Currently, the business conglomerate, which has about 5,000 workers operating in a 260,000 square meter plant located in the capital of the Atlántico department maintains business relationships with nearly 800 customers spread over 27 countries, among which are customers the United States, Colombia, Panama and Bolivia.

In a market that moves about 30,000 million dollars in the United States, Tecnoglass occupies an important position and at the close of 2015 would record sales of more than US $ 240 million.

To continue to achieve success, the Colombian company expects to continue taking advantage of its vertical integration model among its subsidiaries: Tecnoglass is responsible for transforming the glass and then sells it to Energía Solar.

Furthermore, the use of cutting edge technology has enabled the manufacture of new products like glass that retains no energy.

In terms of investment, the company invested this year in a new 20,000 square meter, $40 million dollar ‘soft coat’ glass plant. This could boost sales by up to 20% (US $ 200 million over the next five years) and employ over 700 people.

INCURSION INTO THE COLOMBIAN STOCK EXCHANGE

The operations of this Colombian industry 'jewel' has made investors believe in the company and, according to Jose Manuel Daes, President and CEO of Tecnoglass Inc., the recovery in the last two years reached levels of 35%,in dollars, and 130%, in Colombian pesos.

From the January 6, the Colombian Stock Exchange (BVC) approved the double listing of the common shares of the glass producer under the ticker TGLSC.

Note that the titles of Tecnoglass Inc., listed on the Nasdaq stock market, are unique in being listed in the second most liquid exchange in the global equity market. "We decided to make this double listing with the Colombian Stock Exchange because we want to diversify our shareholder base and expand our exposure and access to the investment community of our country. We are a Colombian company for the world ", said Daes.

With the entry of the new emission, local and foreign investors may acquire shares in both the BVC and Nasdaq through stockbrokers.

The initial price for the share will be the closing price on Nasdaq the preceding day and converted by the Representative Market Rate (TRM) that day.

Being listed on Nasdaq has allowed Tecnoglass Inc. to "be more competitive, constantly innovate and bring best practices with a rigorous corporate governance ", which aims to give investors confidence about the future of the company according to the president of the company.

"We will work hard to be the first choice for local investors, "concluded Daes.