The Panorama Tower located at 1100 Brickell Bay Drive near downtown Miami is 85 stories and is the tallest residential building on the east coast south of Manhattan. 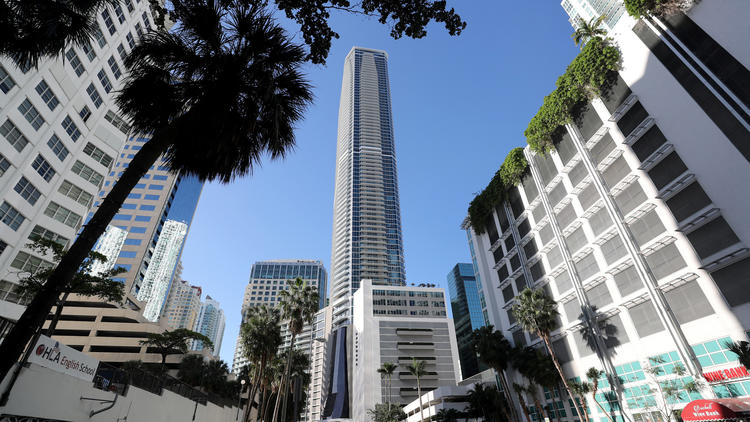 The Panorama Tower located at 1100 Brickell Bay Drive near downtown Miami is 85 stories and is the tallest residential building on the east coast south of Manhattan.

It’s an ear-popping elevator ride to the 85th floor — the tippy top of the Panorama Tower, the tallest apartment building south of Manhattan.

From an eastern balcony in this Miami skyscraper, there’s a bird’s-eye view of manatees in the water and view of all of Key Biscayne, Virginia Key and Fisher Island. You can see landmarks in Miami Beach, Sunny Isles Beach and even as far as Fort Lauderdale.

And off the western balcony, you can catch sight of Tao Sunrise, the two 26-story apartment buildings more than 30 miles away in west Broward.

The Panorama Tower, which opened in June at 1100 Brickell Bay Drive, stands out as a behemoth amid the Miami building boom, presenting astonishing views of South Florida. But perhaps more surprising, the Panorama Tower won’t stay the tallest for long because the company behind it plans on outdoing itself with two taller residential buildings — and other developers aren’t far behind.

Not everyone at the Panorama Tower can appreciate stepping onto a balcony with a jaw-dropping overhang. There might be a renter or two who is “afraid to come out here,” said Jerome Hollo, the executive vice president of the developer, Miami-based Florida East Coast Realty Inc., as he stood on the balcony on a recent sunny day.

So why would anyone bother? “They want to see this when they’re sitting in their living room,” he said, with a nod to the glass windows with the magnificent view.

“We’re looking down on what used to be the biggest buildings in the area,” said Kerry Rosenthal, the developer’s attorney.

The developer said about half of the 821 units are occupied since it opened last summer. When it’s full, Panorama Tower will be home to thousands of people who will share a floor of amenities including a fitness center, pools, wine room, children’s splash pad, a game room with a soccer and golf simulator, soundproof music room, three movie theaters available for private showings, and a formal dining room for dinners too large for an apartment to handle.

The Panorama Tower located at 1100 Brickell Bay Drive in downtown Miami is 85 stories and the tallest residential building on the east coast south of Manhattan. The building features full amenities. (Mike Stocker)

Some of the other tallest buildings south of Manhattan are office buildings, both in Atlanta: The 55-story Bank of America Plaza rises 1,023 feet and the SunTrust Plaza rises 871 feet.

Yet the Panorama Tower will see competition.

A developer from Istanbul is planning a 70 or 72-story, 890-foot tower in the downtown that would edge out the Panorama Tower, which eclipsed the nearby Four Seasons Tower, which stands at 789 feet.

The billionaire businessman envisions a mixed-use high-rise, called Okan Tower, whose residents and visitors can swim in a pool on the 70th floor, relax in a Turkish bath — in a building whose silhouette will take the shape of a tulip, the national flower of Turkey. Construction could begin this summer.

Also, Hollo’s company, founded by his father Tibor Hollo, has plans to build two residential buildings in Miami that also will aim for greater heights.

One Bayfront Plaza was built about 60 years ago as a 19-story office and retail building.

Although the developer has owned it for about 40 years, the company is waiting for leases to expire in late 2020. By 2021, it plans to break ground on what is now planned to be a 92-story rental apartment project that will keep the same name.

One Bayfront will take up a city block at 3.2 million square feet and cost at least $1 billion to build.

A 100-story condo project called The Towers could soar 1,049 feet. Two towers that are connected by the same base and connected by bridges will take up 2.5 million square feet.

Runs in the family

Hollo’s father built towers that were the largest in their day, including The Rivergate Plaza Complex, built in the 1960s at 15 stories, which was the first high-rise building on Brickell Avenue. And his Venetia condominium hit the market in the late 1980s at 52 stories.

The Panorama Tower, at 1100 Brickell Bay Drive, opened in June near downtown. Tenants need a key fob to get to their floor on the elevator, which travels at 1,200 feet a minute.

Paul George, resident historian for HistoryMiami Museum, said Miami has the third-highest skyline in the U.S., behind New York and Chicago.

“When you are out on a boat you can really appreciate the scale and the density and Tibor [Hollo] has been a major player,” George said. “It’s part of that puzzle, that Brickell area has been going crazy for the last 30 years and ... it’s like one outdoes the other.”

The Panorama Tower: By the numbers

Here are some fun facts about the Panorama building.